Many left many years ago 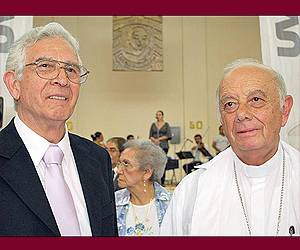 Just found out that Fr. Neftali Sanchez (above, left), recruited  as a child by Nuestro Padre Maciel, recently celebrated his Golden Jubilee as a priest in the diocese of Morelia. One of the handpicked very first group of children recuited by the Founder, Neftali was ordained in the 1960'. He was sent to be the first Legionary priest in Ireland and to minister to the postulants -as I describe in my memoir, Our Father [Maciel] who art in bed.

As so often happens in the Legion, he 'disappeared' not long afterwards never to be mentioned or heard of again in our communities. He fell into the black hole of the unfaithful departed.  Jose Barba caught up with him again in Morelia, his home diocese, years later. Neftali was happily teaching at a university and performing his pastoral duties.

The following link leads to a Spanish language article describing that happy celebration.

Greetings to Fr. Neftali, my first LC priest, after Maciel, but the first one to minister to me, as Father Maciel's visit to us postulants was short and his presence fleeting.

Fr. Neftali [on the left] was the one who told me after confession one day that Nuestro Padre had 'seen my qualities' and wanted me to travel to Salamanca to begin my holy Novitiate and be among the first group of Irish Novices...

Posted by irishmexguate at 6:05 PM