Steve Skojec Slams the Door on Maciel, Regnum and Legion 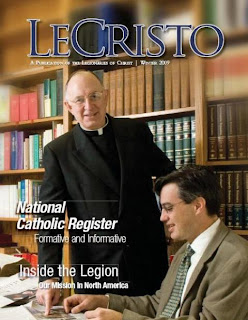 THE COMPLICITY OF THE LEADERS


The statement also makes a severe and unprecedented judgment of the "system of relationships" constructed around Maciel, of the "silence of the entourage," of the "mechanism of defense" of his disgraceful life.

Writing that "most of the Legionaries were unaware of this life," the statement implicitly affirms that some of them did know about it.

So there will be no indulgence for the "system of power" that closed ranks around Maciel before and after his death, meaning the current central and territorial leaders of the Legion.

In particular, it is completely unrealistic to think that the ax might spare the two supreme leaders, director general Álvaro Corcuera and vicar general Luís Garza Medina.

The latter of these, until now the real man in charge of the Legion from the financial point of view, has done everything possible over the past few weeks to position himself as a new Talleyrand, capable of remaining in the saddle even in the Thermidor, after having supported the Terror.
Posted by irishmexguate at 11:50 AM